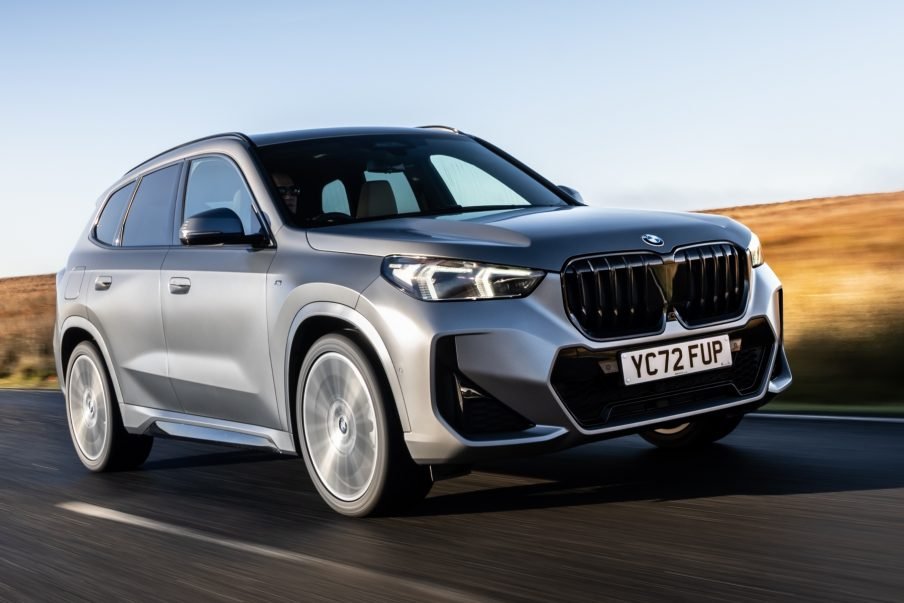 Now it’s time for the third generation, and it’s a much improved proposition in every department.

Size is everything in the modern world and the new X1 is slightly bigger than its popular predecessor (53mm longer, 24mm wider, 44mm higher and 22mm in wheelbase), crucially delivering more space for passengers and their luggage. 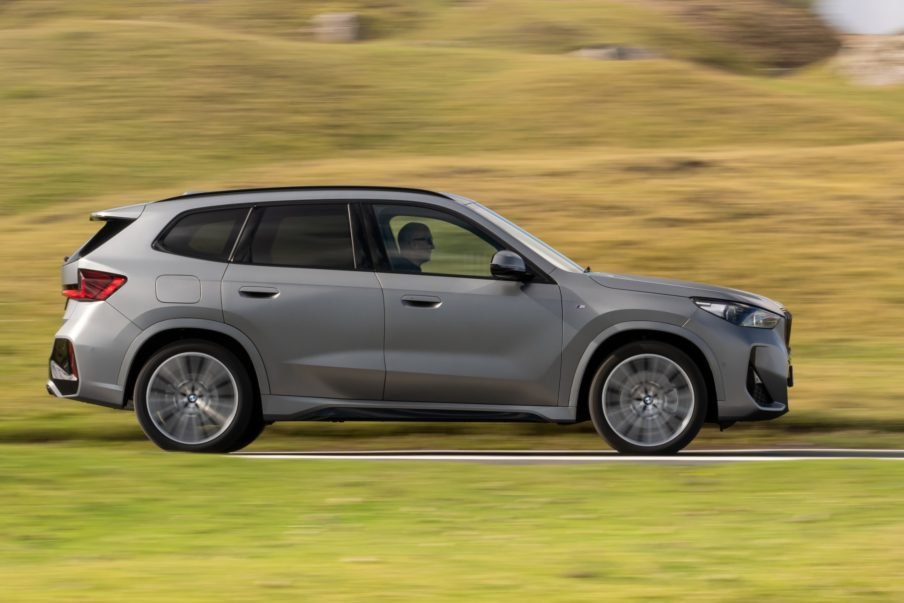 So, just as the latest Volkswagen Polo is about the same size as the original Golf, the new X1 isn’t far off the Mk 1 BMW X3.

Sharing the same platform as the BMW 2 Series Active Tourer MPV, the overall shape of the Mk 3 X1 is chunkier with a greater road presence.

Up front, the large kidney grille is flanked by slim LED headlights. The side profile sports meaty wheel arches and fared-in door handles, while the rear boasts a pert tailgate, three-dimensional LED lights and underride protection. 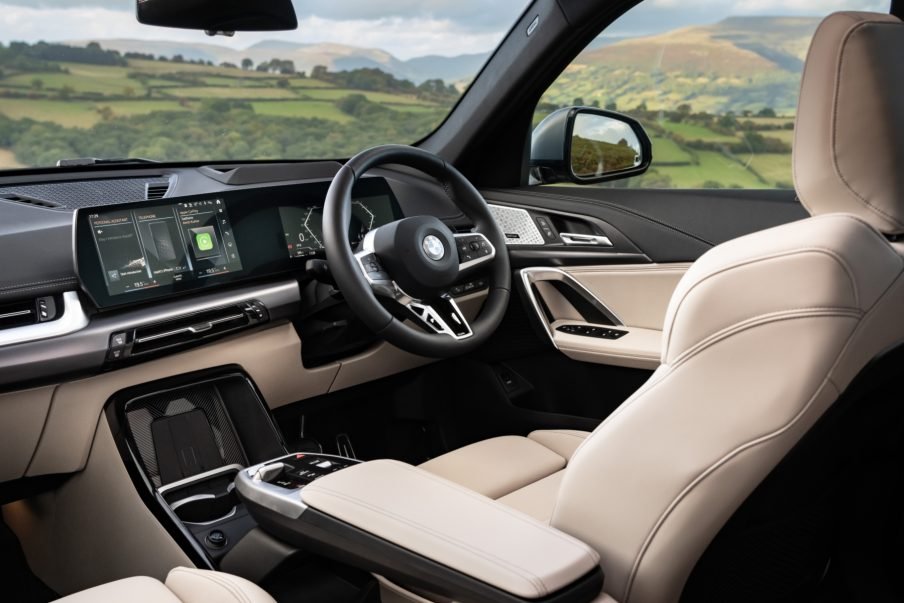 The curved screen infotainment system is mainly operated via the touchscreen, voice commands and flush buttons on the steering wheel. There’s no longer a rotary controller next to the gear selector, which may annoy some, along with the general minimalisation of switches, buttons and dials.

Priced from £33,775, the new X1 is available with a range of petrol, diesel and plug-in hybrid engines (with an EV range of up to 57 miles), while a flagship all-electric iX1 variant joins the family in early 2023.

BMW expects 66% of UK sales to be pure electric, 14% PHEV and the final 20% split between petrol and diesel.

We had a brief test drive in a prototype iX1, but spent most of our time in the xDrive23i, which features a 2.0-litre four-cylinder petrol engine with 48V mild hybrid tech that makes 215bhp and is mated to BMW’s seven-speed Steptronic dual clutch transmission. 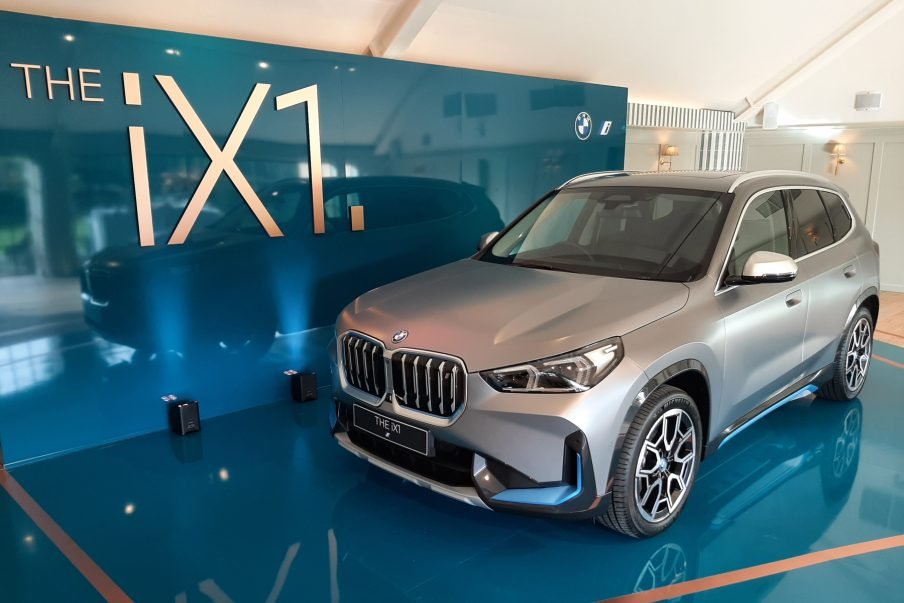 The top-of-the range iX1 EV costs substantially more, has a 64.7kWh battery producing 308bhp, a claimed range of up to 272 miles, and it can polish off the 0-62mph sprint in a swift 5.6 seconds.

We tested the AWD xDrive23i in xLine and M Sport trim levels (there’s an entry-level Sport too), and a posh piece of kit it is too, with BMW’s usual top build quality and classy materials.

There’s a commanding view of the road from up front (I would prefer the option of a lower seating position), visibility is good, though the reversing camera (standard on all models, along with front and rear sensors) comes in handy when manoeuvring thanks to the slim tailgate window. 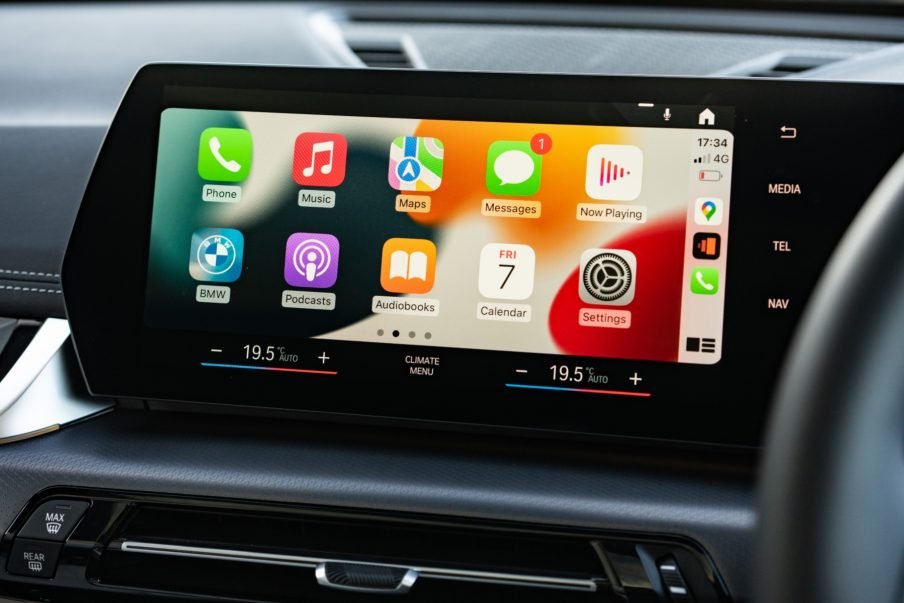 A special mention for the infotainment system, which is slick and sharp, along with the clear head-up display and augmented satellite navigation system which overlays upcoming directions on the touchscreen via big chevron graphics.

Refinement levels in the cabin are impressive, there’s plenty of grunt from the petrol engine, which is only vocal under heavy acceleration, while the sweet-shifting gearbox cracks on effortlessly.

The M Sport comes with adaptive suspension, and frankly the difference is marginal. Overall, the set-up is on the firm side, which is noticeable on bumpier surfaces, but not uncomfortable. 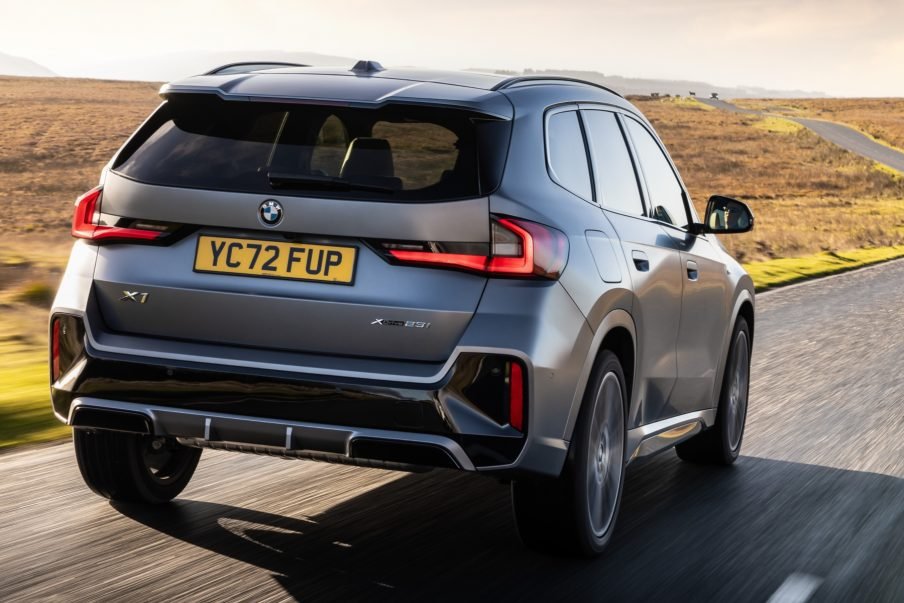 The pay-off is that the X1 delivers a more dynamic driving experience. With an agile feel, body control and grip levels are good in more challenging corners – whether you’re in Personal, Sport or Efficient drive modes. Meanwhile, the steering is light and direct, making town driving a doddle.

It’s worth noting that the M Sport gets shift paddles and the left one activates the Sport Boost, which delivers an extra 19bhp of power (useful for overtakes).

Of course, the iX1 is the one to go for if you can stretch to £52,255 and you have a home charger. It looks just like its petrol, diesel and PHEV siblings, but BMW’s entry-level electric car is a real smoothie. 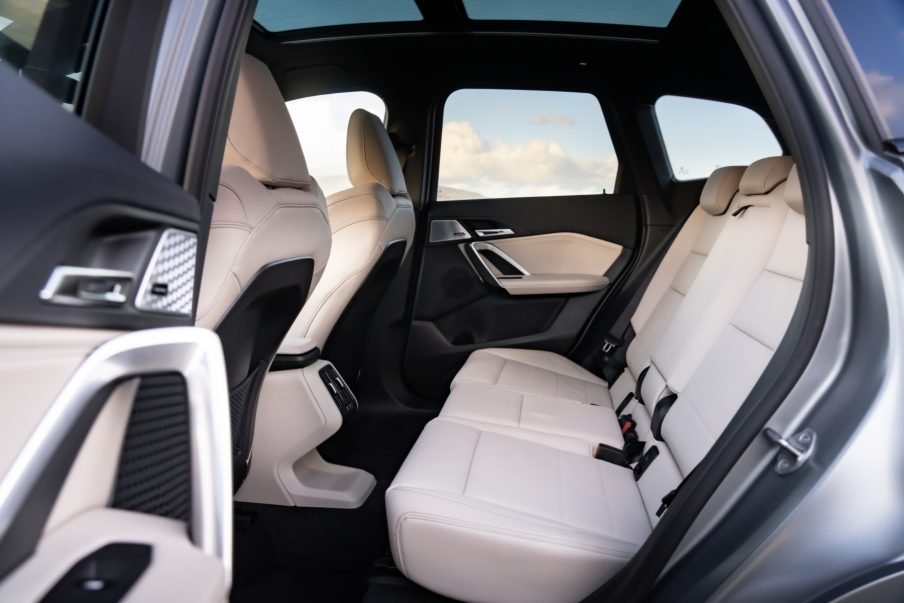 Faster than it really needs to be (there’s a Sport Boost function too), it’s whisper quiet (once you switch off the irritating Hans Zimmer ‘IconicSounds’ digital soundtrack) and easy to drive.

Despite the fact that it weighs around 400kg more than its ICE stablemates, the boffins at BMW have done a great job hiding it, because the iX1 is nimble and fun.

The iX1 we tested has two electric motors, one driving the front wheels and one the rears. Needless to say, there’s excellent traction and it feels nicely composed.

Whether you go electric or not, BMW’s baby SUV is a practical proposition with plenty of space inside the cabin and superb leg and headroom in the back. 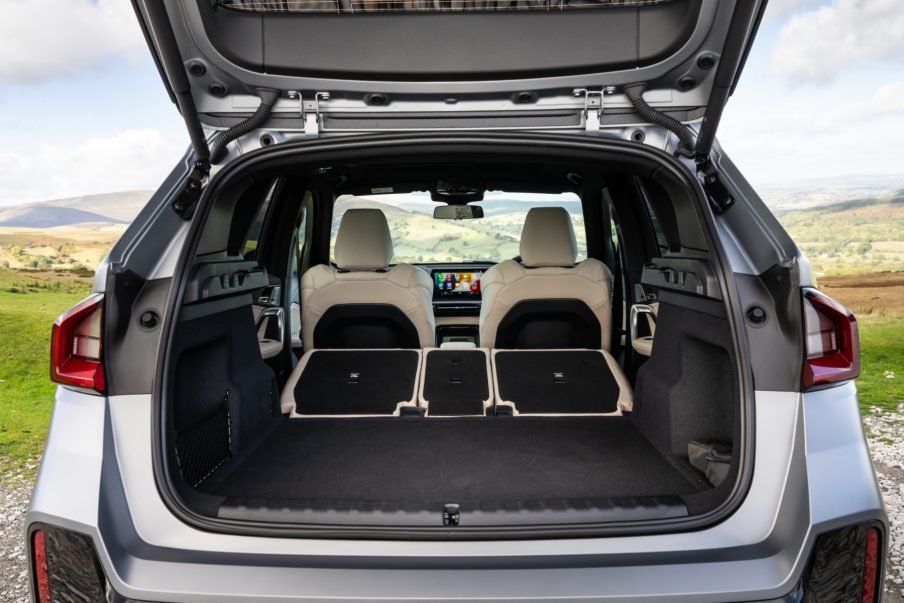 Boot space varies according to the degree of electrification, but peaks at 540 litres for the petrols and diesels (1,600 litres with the 40/20/40-split seats folded).

Finally, the X1 is safe too. Awarded a maximum five stars by Euro NCAP, it’s packed with safety and driver assistance goodies as standard, including autonomous emergency braking (AEB), lane departure warning and speed limit assist, plus an additional centre airbag between the driver and front passenger seats.

Verdict: The latest-gen BMW X1 goes straight to the top of the class with its winning blend of space, technology, driving engagement and quality. If you’re looking for a classy, compact family SUV, the X1 should head your shortlist. 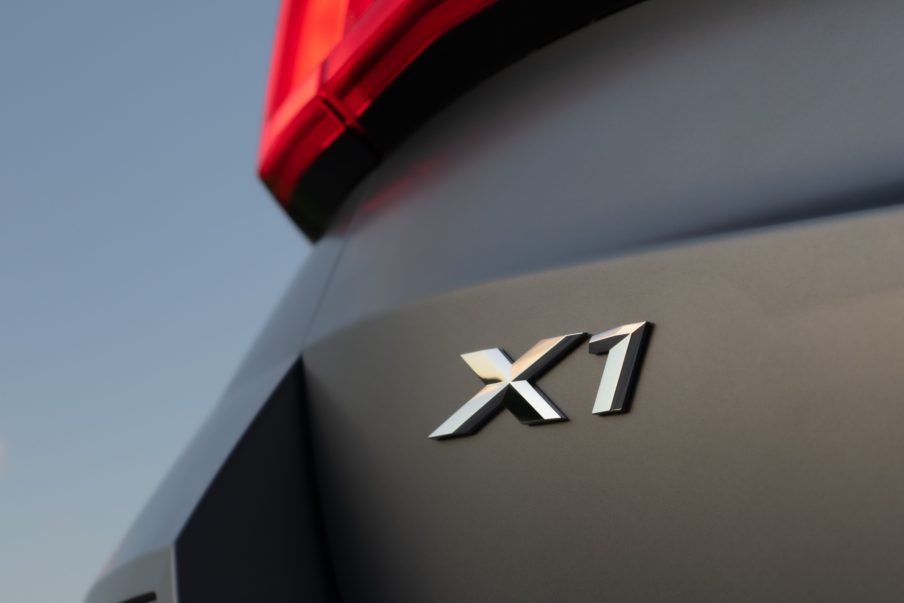