The Nissan X-Trail is a global success story. Originally launched in 2001, more than seven million have been sold globally, making it one of the world’s most popular SUVs. In the UK alone, some 138,599 have found homes.

Now it’s the turn of the fourth-generation X-Trail, marketed as “the only electrified seven-seater SUV”.

However, there’s more to the new X-Trail than the optional extra seats. It’s everything you’d expect from a vehicle with such well-established DNA, but it also delivers state-of-the-art hybrid technology, versatile packaging, comfort and genuine off-road capability.

Priced from £32,030 to £47,155 and available as either a mild-hybrid or with Nissan’s unique ‘e-Power’ hybrid powertrain, the X-Trail is more than a match for its rivals which include the Skoda Kodiaq, Hyundai Santa Fe, Kia Sorrento and latest Toyota RAV4 (though it only has five seats). 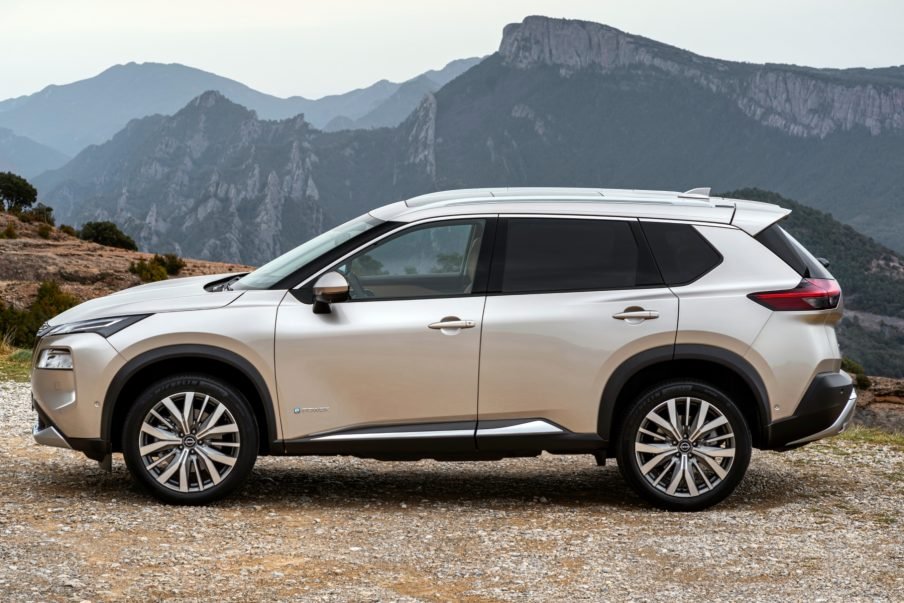 The X-Trail takes design cues from its smaller sibling, the Qashqai, including the brand’s signature ‘V-Motion’ trapezoidal grille.

Wider and taller than the outgoing model, it’s well-proportioned with a chunky, more muscular design. The extra cladding around the wheel arches and bumpers, slim headlights and big wheels (20 inches on our test car) give it real road presence.

The interior of the new X-Trail is a big step-up too. Modern, spacious and bathed in light, it has a near-premium feel with classy materials and great build quality.

There’s a commanding view of the road from the comfy seats, and if you do have any qualms about manoeuvring into tight spaces, there’s ample tech on board to help you, whether it’s sensors or a 360-degree camera with Moving Object Detection. 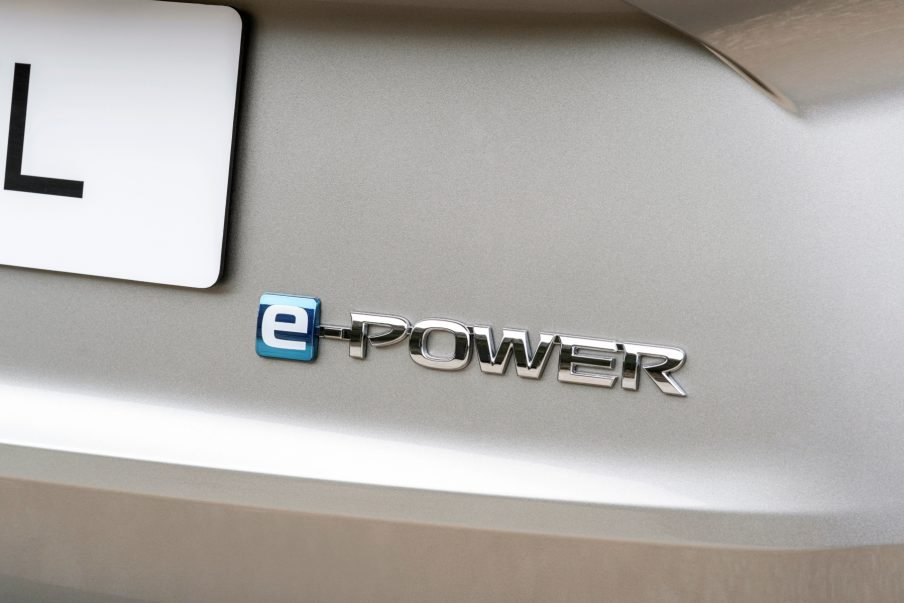 Your choice of grade (from entry-level Visia to top-of-the-range Tekna+) will determine which goodies you get with your car, but we’d say the mid-range N-Connecta which gets the twin 12.3-inch displays up front, roof rails and privacy glass is a good choice.

However, if you splash out on the next grade up (Tekna) you get a panoramic sunroof, electric tailgate, head-up display, wireless phone charger and ProPilot Assist with Navi-Link – an impressive suite of safety and driver assistance tech.

Equipment and tech is one thing, but the big decision you have to make with the new Nissan X-Trail is which electrified powertrain to choose. 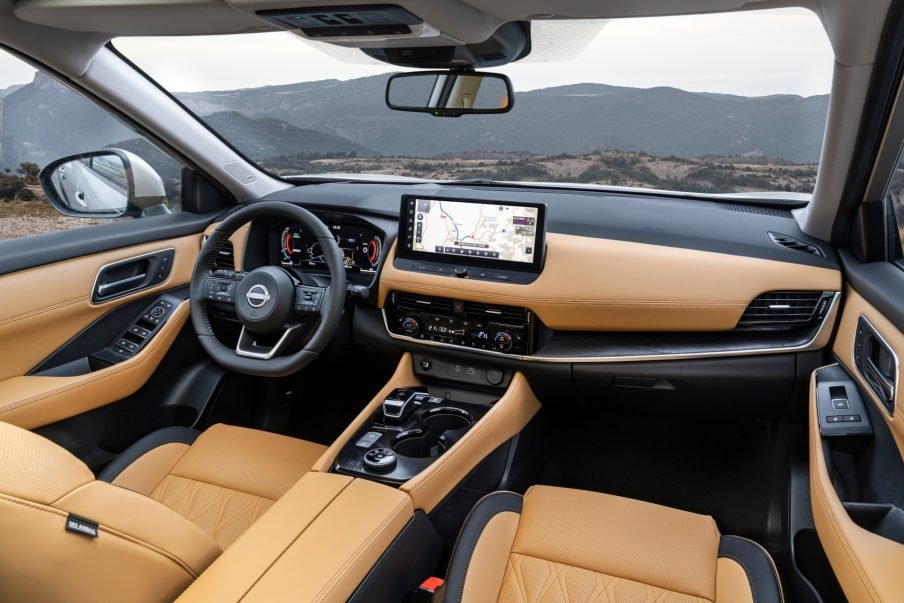 The entry-level option is a 161bhp 1.5-litre turbocharged petrol with mild hybrid assistance, which is only available with front-wheel drive.

Next up is the X-Trail e-POWER, which is Nissan’s take on a full hybrid (no need to plug it in). The drivetrain combines a 1.5-litre petrol engine of 201bhp with a 150kW electric motor on the front axle.

Unusually, the petrol engine doesn’t drive the wheels at all – it simply acts as a generator to charge the 2.1kWh battery and power the electric motor, which is responsible for driving the wheels at all times. 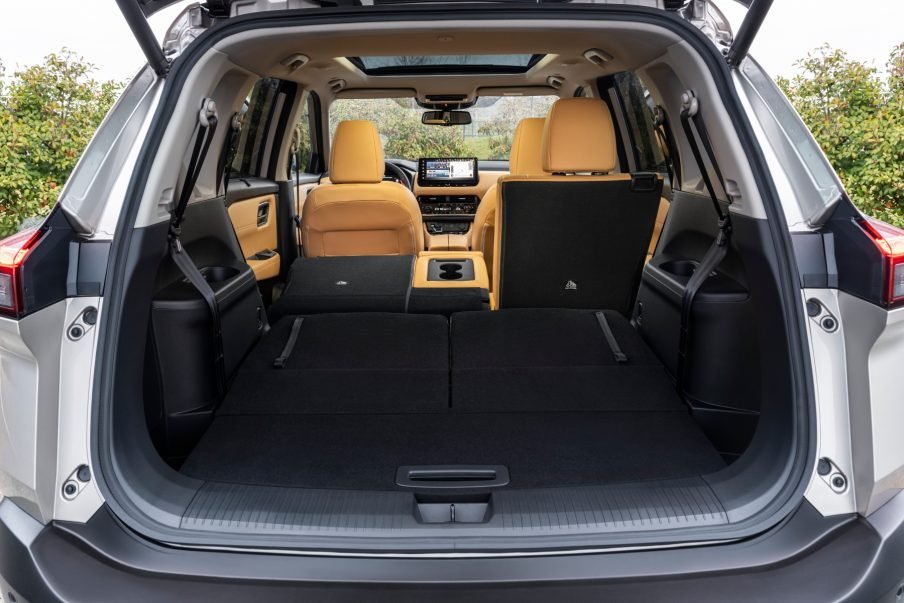 The stats for the three powertrains are predictable. Fuel economy on the mild hybrid is up to 39.9mpg, CO2 emissions start at 161g/km, while the 0-62mph sprint takes 9.6 seconds.

The two-wheel drive e-POWER takes eight seconds to reach 62mph and can manage as much as 48.6mpg, while CO2 is as low as 132g/km.

Finally, the e-POWER with e-4ORCE is the fastest accelerating (7 secs), has CO2 emissions starting at 143g/km and fuel economy tops out at 44.7mpg.

Unless you need all-wheel drive, on paper the mid-range X-trail with e-POWER looks like it offers the best blend of performance and economy.

Perhaps what’s most surprising is that Nissan’s hybrid system produces economy figures which are not dissimilar to a conventional hybrid where a battery provides electrical assistance to a petrol motor which drives the wheels.

We tested the flagship e-POWER with e-4ORCE on a mixed driving route, which included some gentle off-roading and controlled automotive gymnastics – and it’s an impressive piece of kit. 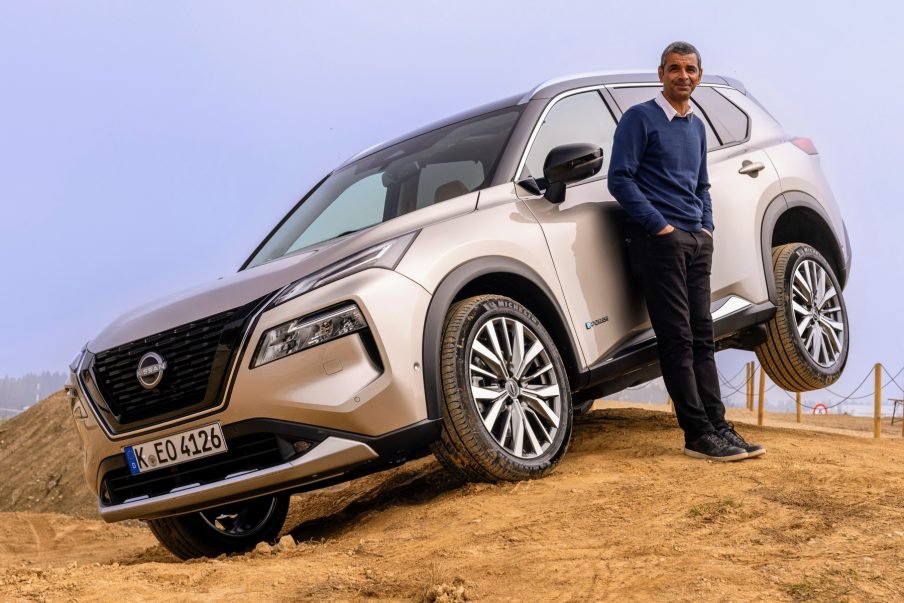 As you glide off, it’s immediately clear that the new Nissan X-Trail is no ordinary 4×4. The ride is smooth (even with the 20-inch wheels), the cabin is a comfortable and refined place to be, and it feels substantial.

Despite its large dimensions, it’s easy to drive with light and responsive steering. Hustle it a little and it remains remarkably composed.

Body lean is surprisingly well controlled in more challenging corners and there’s superb grip and traction – even on the rough stuff. In fact, it’s very capable off-road, demonstrating a surprising amount of agility in a serious of tests.

It takes a while to get used to the sensation of the engine revving away in the background as it charges up the battery. The only time it makes its presence known is when you’re heavy with your right foot, especially on uphill stretches. 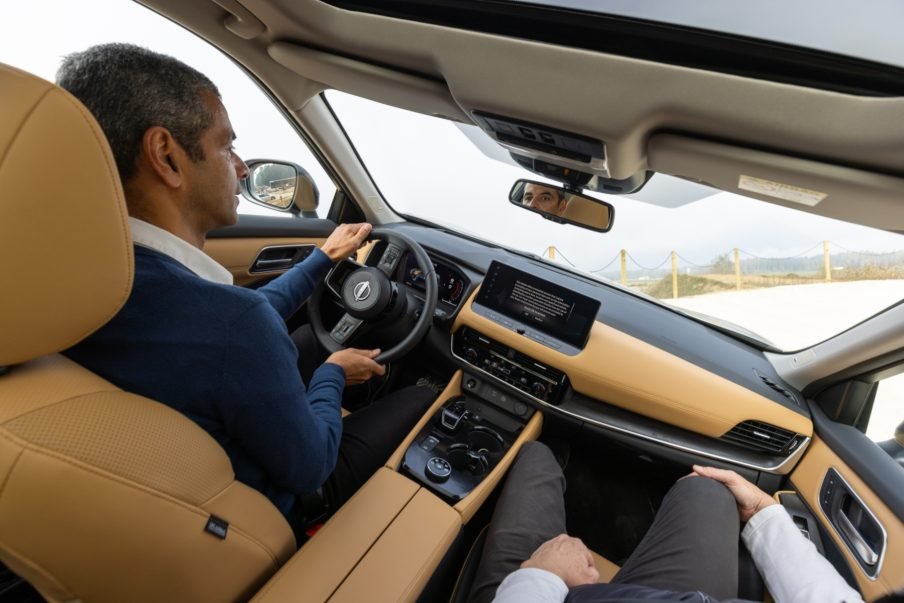 Though it’s reasonably vocal, frankly it’s nowhere near as intrusive as full hybrids using CVT transmission from other manufacturers.

Nissan says the X-Trail has a 10,000 times faster rear torque response than a mechanical 4WD system, adding that the constant torque redistribution also contributes to handling and ride comfort, enabling a powerful yet smooth, driving experience.

I’ll go along with that, because the X-Trail is an excellent all-rounder – just as content cruising on a motorway as it is soaking up the worst poor surfaces have to offer.

What’s more, the X-Trail has always been a favourite with caravanners, so the braked towing capacity of up to 2,000kg will be welcome. 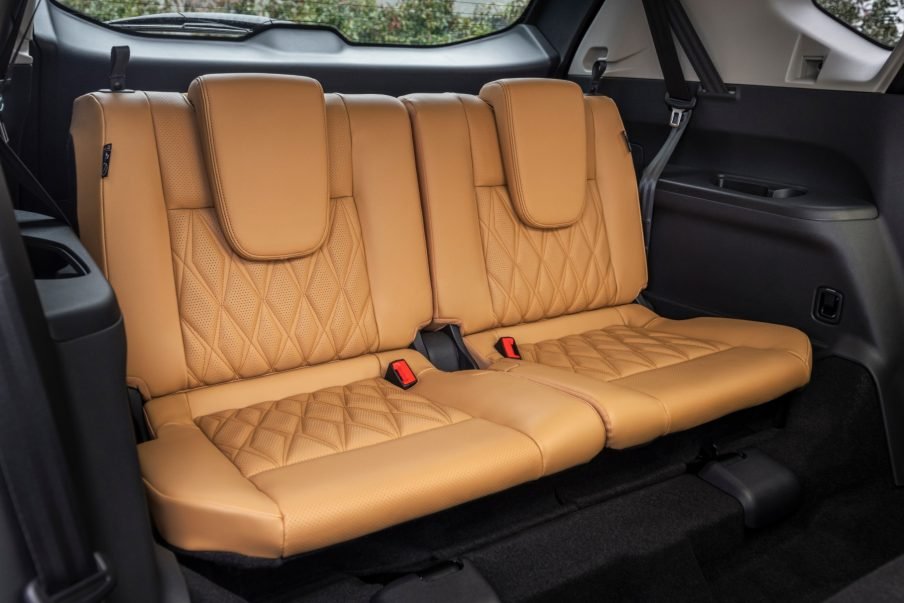 Finally, let’s deal with one of the X-Trail’s USPs – that optional third row of seats. I’m a fraction under six-foot and I could squeeze into seats six and seven, but in order to travel any distance the second row would have to slide forward, which may in turn require some compliance from the driver and front passenger too.

So, I’d say the third row of seats is there for occasional use, preferably children and small adults.

With the third row of seats in use, the X-Trail’s boot has a capacity of 485 litres. In five-seat formation (where there’s ample space for three passengers) this increases to 585 litres, and with both sets of rear seats down there’s a cavernous 1,424 litres of space.

A quick mention too for the rear doors which open at an impressive 85-degree angle (just like a Qashqai) for easy access – useful for lifting small children into car seats, for instance.

Verdict: Smooth, refined, robust and easy to drive, the hybrid Nissan X-Trail is a class act. Offering a unique proposition in the SUV sector, it’s also surprisingly capable off-road and delivers big bang for your bucks.