Slotting in above the slightly smaller CX-5, the all-new CX-60 is Mazda’s new flagship SUV.

Not only does it close the gap on premium rivals from Europe, such as Audi, BMW, Jaguar, Range Rover and Volvo, but it’s available as Mazda’s first ever plug-in hybrid.

The Japanese company still hasn’t given up on the internal combustion engine and the PHEV version is a natural progression.

What’s more, plug-in hybrids look like they will get a stay of execution for five years after the sales of new petrol and diesel cars are banned in 2030, so there’s life in the technology yet. 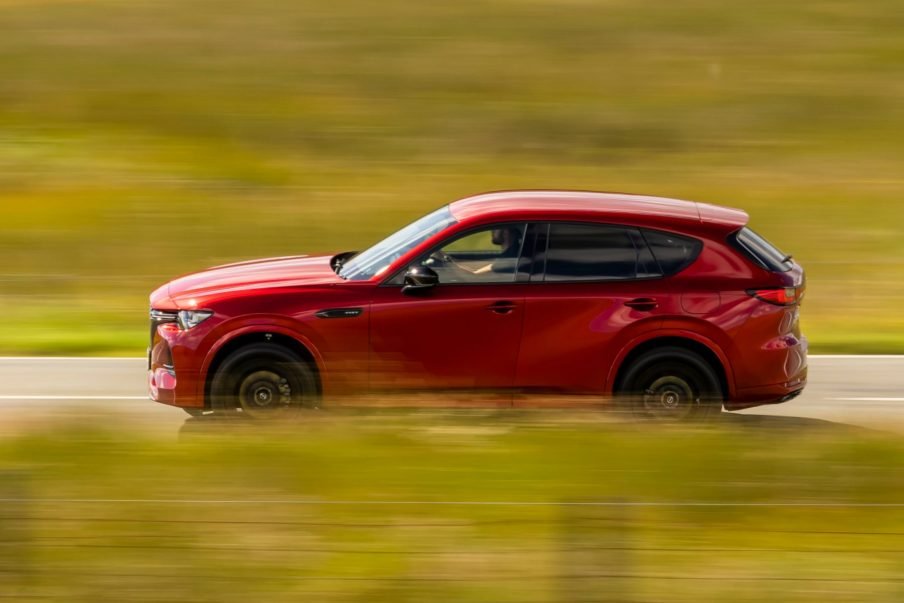 The CX-60 PHEV combines a normally aspirated 2.5-litre four-cylinder petrol engine with a 100kW electric motor and a 17.8kWh battery.

The result is a total output of 323bhp and 369lb ft of torque, making it the most powerful road car Mazda has ever produced, capable of sprinting from standstill to 62mph in just 5.8 seconds.

What’s more, on paper, fuel economy could be as high as 188mpg with CO2 emissions as low as 33g/km.

Offering up to 39 miles of pure electric driving from a full charge, your visits to a petrol station could be few and far between if you have a modest daily commute. And if you’re a business user, considerable tax advantages come with that meagre CO2 figure. 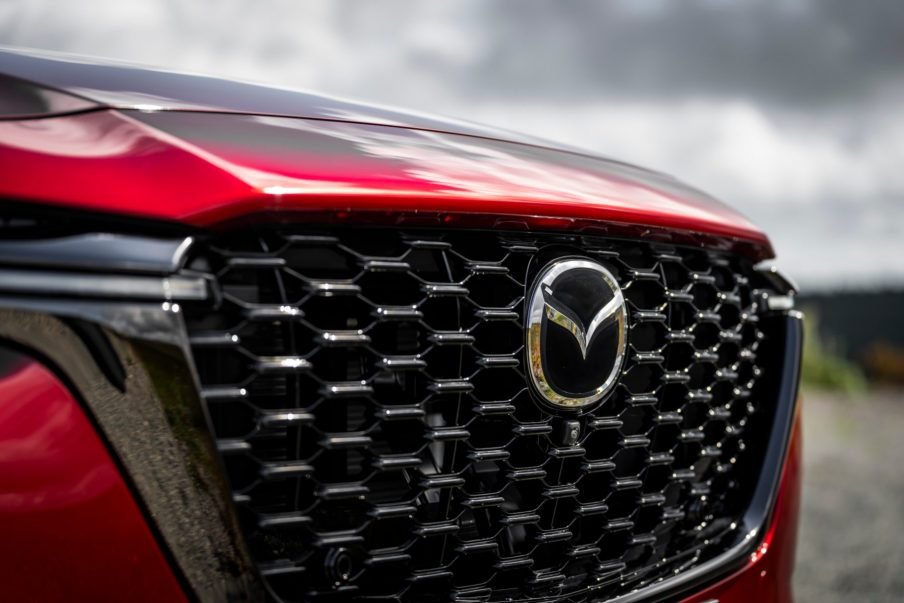 Further down the line, Mazda will also be offering the CX-60 with 3.3-litre diesel and 3.0-litre petrol engines – both six-cylinders paired with a 48V mild hybrid system.

You can also choose from two option packs across all grades (Convenience Pack and Driver Assistance Pack), while a Comfort Pack is available on Exclusive-Line.

Highlights of the £1,000 Convenience Pack include privacy glass, a 360 view monitor and wireless phone charging, while the Driver Assistance Pack adds extra active safety technology for £1,100. 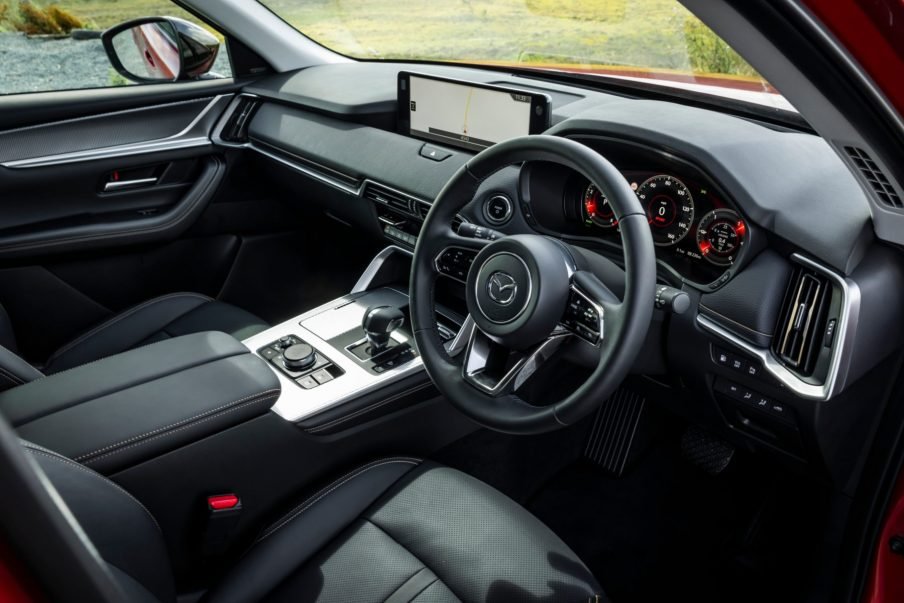 Not only is the CX-60 PHEV well equipped, it’s superbly put together and the quality of the materials used inside the cabin is excellent.

Externally, the CX-60 is very similar to the CX-5, but can be distinguished by its bold nose, which polarises opinion. Let’s just say that it’s not the most attractive Mazda head-on.

And at just 190mm longer, 50mm wider and about the same height, there’s not much between them in size, though the CX-60’s more athletic stance hides its height a little better.

There’s nothing revolutionary inside the cabin. It’s still very much a Mazda, which is no bad thing. 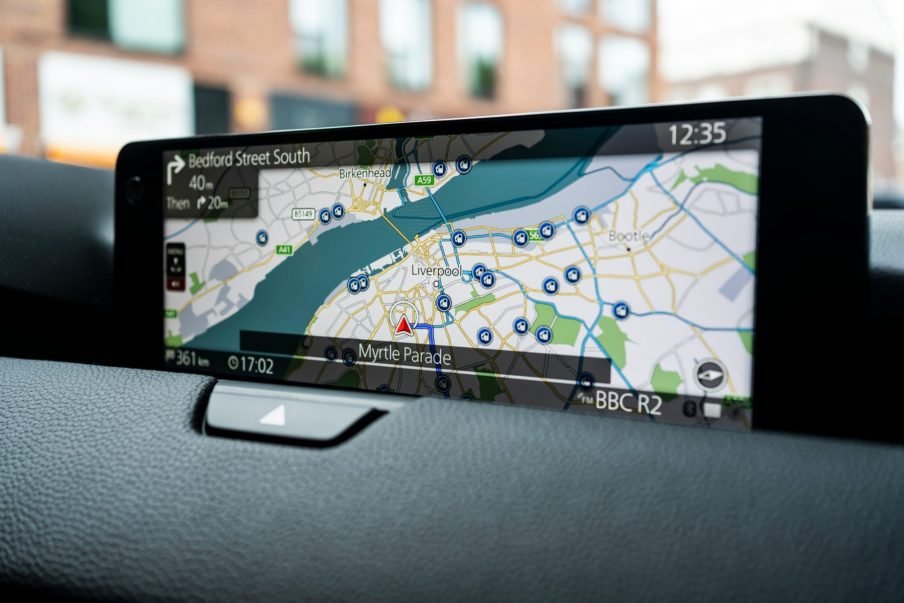 There’s a large centrally-located 12.3-inch infotainment screen on top of the dashboard, while Mazda’s sticking with its rotary controller near the gear selector. It’s not a touchscreen, and much of the car’s functionality is accessed by a twist and click.

If you’re not used to a touchscreen, it works well from the off, and even if you are, it becomes second nature after a few hours.

Thankfully, Mazda has kept some buttons and dials, so the climate control can be accessed separately and there’s still an audio volume knob. Additionally, there’s extra functionality, such as cruise control via the steering wheel, while the clear head-up display is one of the best. 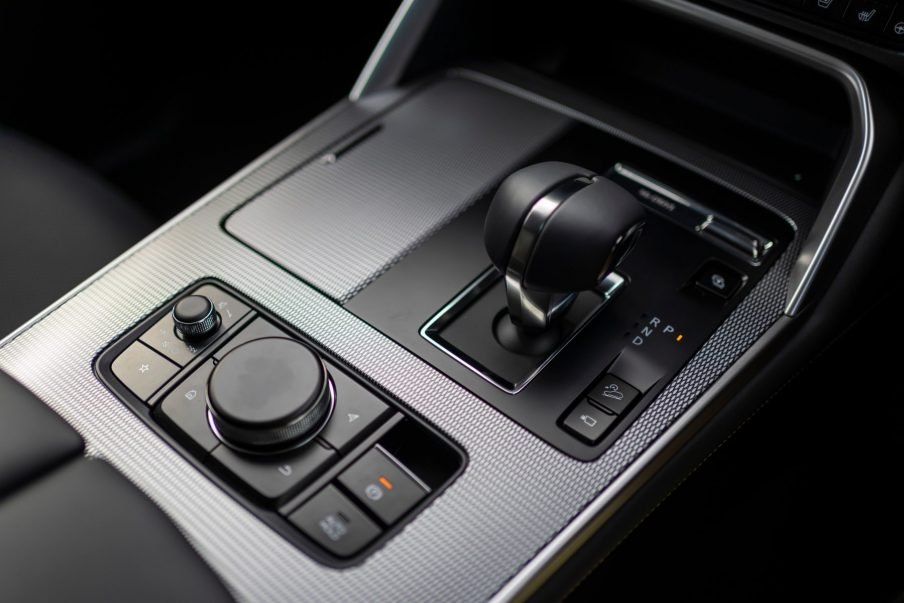 The cabin itself is spacious, though little different to the CX-5 in the back, so while adults can sit comfortably in the rear, there’s not class-leading legroom.

The CX-60’s substantial 570-litre boot is about 50 litres bigger than the CX-5’s, expanding to 1,726 litres with the rear seats folded down.

The driving position is great, with plenty of adjustment available (unusually for an SUV, it is possible to sit lower if you prefer). Whichever you choose, there’s a commanding view of the road.

If you’ve had your CX-60 on charge (it takes 2hr 20 min via a 7kW home charger), or you have some charge left, it will start off in EV mode.

Unlike some PHEVs, there is a vague whine from the off, but it’s smooth going and, in theory, if you take it easy the petrol engine won’t kick in until you hit 62mph. 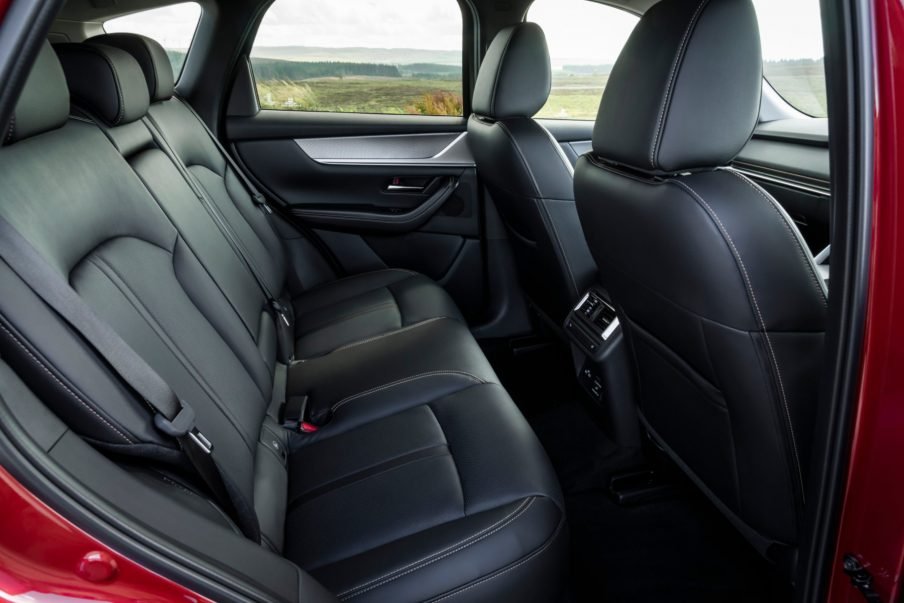 The transition from EV to petrol and vice versa is seamless if you’re not in a hurry. However, if you’re heavy with your right foot there’s a little hesitation and the petrol engine becomes more vocal.

There are four drive modes accessed by a selector (Mi-Drive) near the rotary controller – Normal, Sport, Off-Road and EV.

Frankly, Normal is just fine. The driver’s display turns an angry red if you select Sport and the engine can get a little harsh, but it does firm up the throttle response and handling.

Obviously EV will keep you driving in electric mode until the battery runs out, while Off-Road will help you along if the going gets tough.

Mazda isn’t pretending it’s a hardcore 4×4, but the extra traction and raised ride height should help you out on those rare extreme weather occasions. 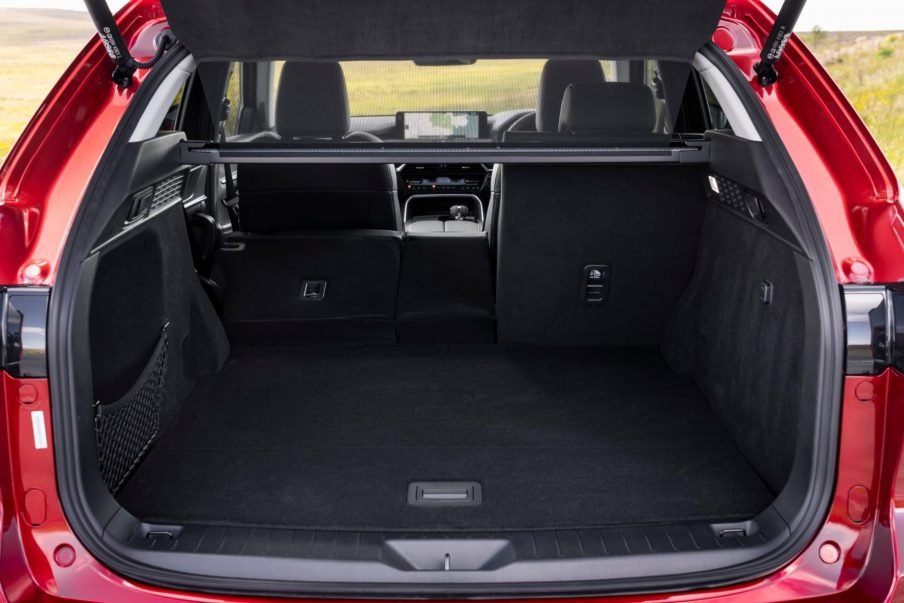 The petrol engine is mated to a new eight-speed automatic transmission, and for the most part it works perfectly well. However, it can be hesitant on kickdown and hold onto a gear for a little longer on hills. Should that happen, it is possible to manually hurry things along via the steering wheel paddle shifters.

Initially, the CX-60 feels big and heavy, but thanks to that excellent driving position and Mazda’s “Kinetic Posture Control” technology, you soon settle in, and it feels surprisingly agile and controlled in more challenging corners.

There’s plenty of grip and traction, while the steering is light and precise. As with most hybrids, the brakes aren’t the most progressive, but they are effective, and you soon get used to them.

The ride is on the firm side, and even though there’s plenty of power on tap, it is at its most relaxed and refined best cruising along. 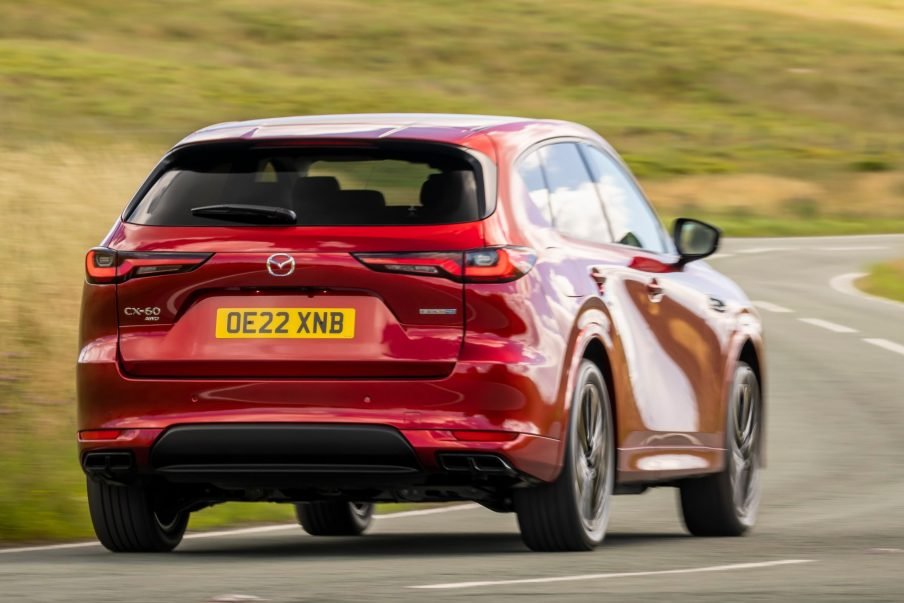 As with any PHEV, fuel economy will depend on whether you keep the battery charged up, journey length, speed and driving style. So, while 100mpg is quite possible on shorter runs where the petrol engine is hardly used, your MPG can dip into the 30s on longer trips when the battery charge is used up and the 2.5-litre petrol engine does the heavy lifting.

It’s also worth noting that the CX-60 is one of the few PHEVs able to pull a caravan or trailer with a decent towing capacity of 2,500kg.

The CX-60 is a welcome addition to the plug-in hybrid club that includes some formidable opposition in the shape of the Toyota RAV4, Volvo XC60, Lexus NX, Audi Q5 and BMW X3. 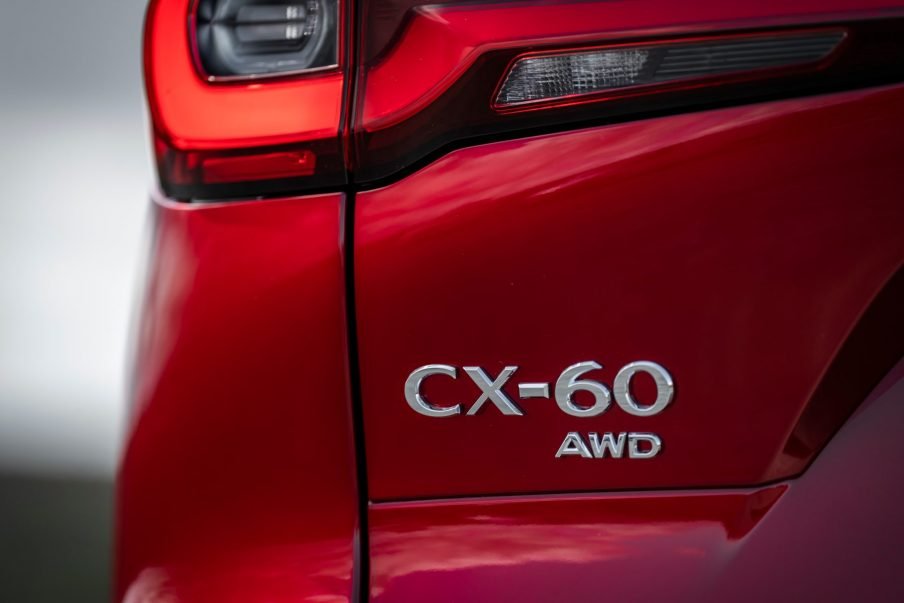