Made in Britain at Nissan’s giant Sunderland plant, the Ford Focus-sized hatchback is now in its second generation, but the opposition is now in hot pursuit. 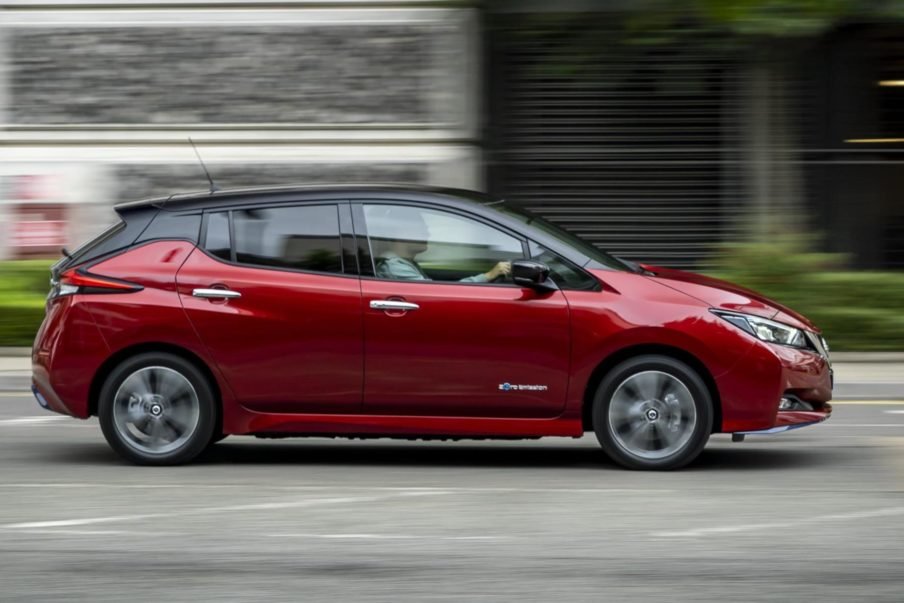 EVs such as the all-new Kia e-Niro and Hyundai Kona Electric are now offering a claimed range of closer to 280 miles which is why the new Nissan Leaf e+ is so important.

This new range-topping Leaf features a more powerful 62kWh battery (up from the previous 42kWh) producing 217PS (up from 150PS) and more torque.

It’s quicker too, with its 0-62mph acceleration time shaved from 7.9 seconds to 6.9 seconds. 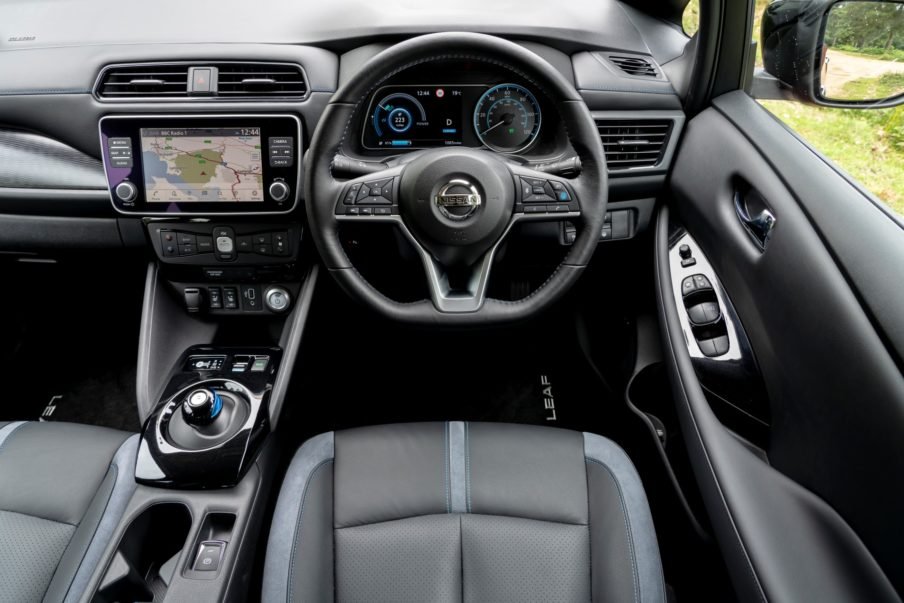 Most importantly of all, this 55% increase in battery capacity means the range of the Leaf e+ is up from 168 miles to 239 miles. 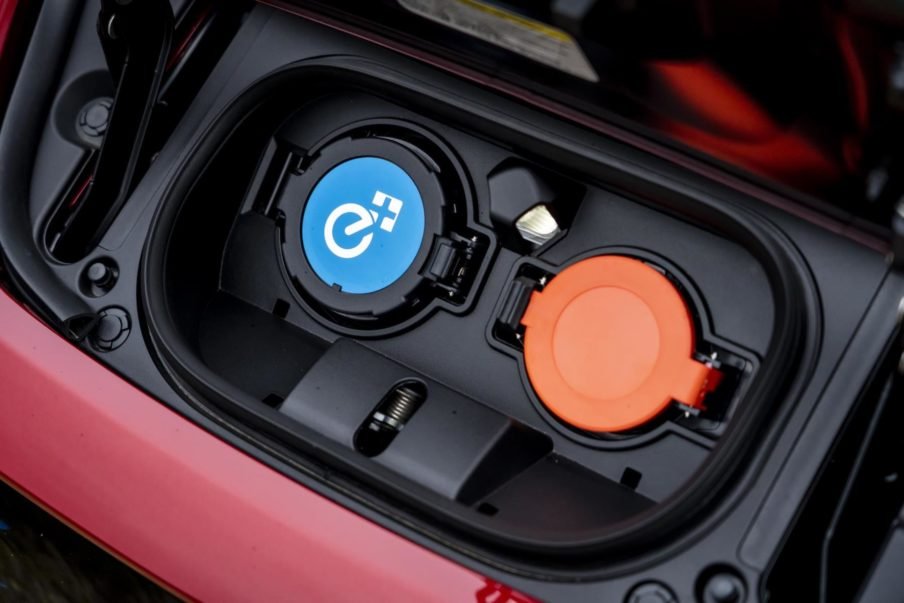 The Leaf e+ is 5mm higher, features a slightly tweaked front bumper with a blue strip and there’s an e+ embossed charging point.

Out of sight the suspension has been firmed up a little to compensate for the weight of the extra battery cells (130kg).

The good news is that despite the increase of almost 100 cells, the new, compact battery pack (under the seats) doesn’t take up any extra interior space. 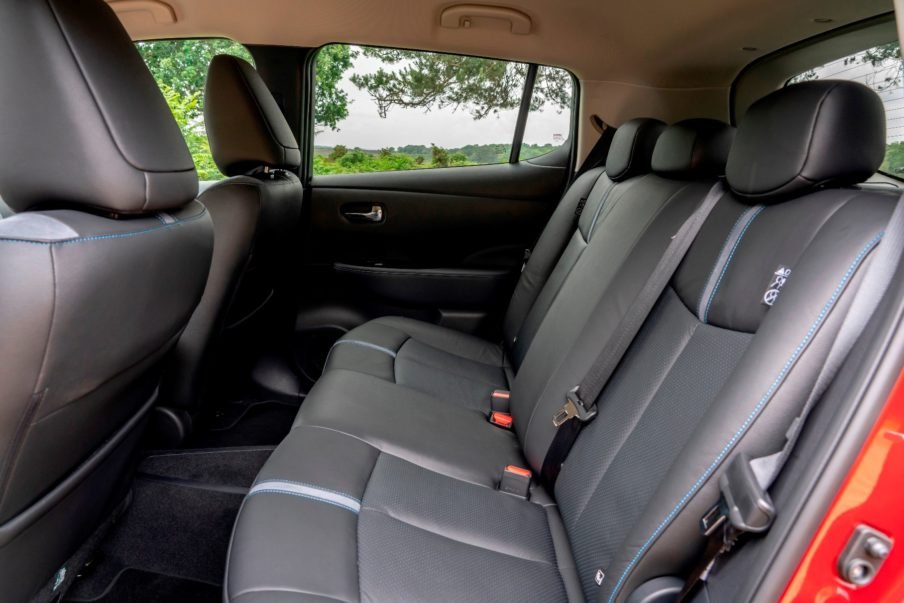 Elsewhere, the Leaf e+ is unchanged, which is just as well, because it’s a winning combination and a big improvement on the original Leaf in terms of style and packaging. 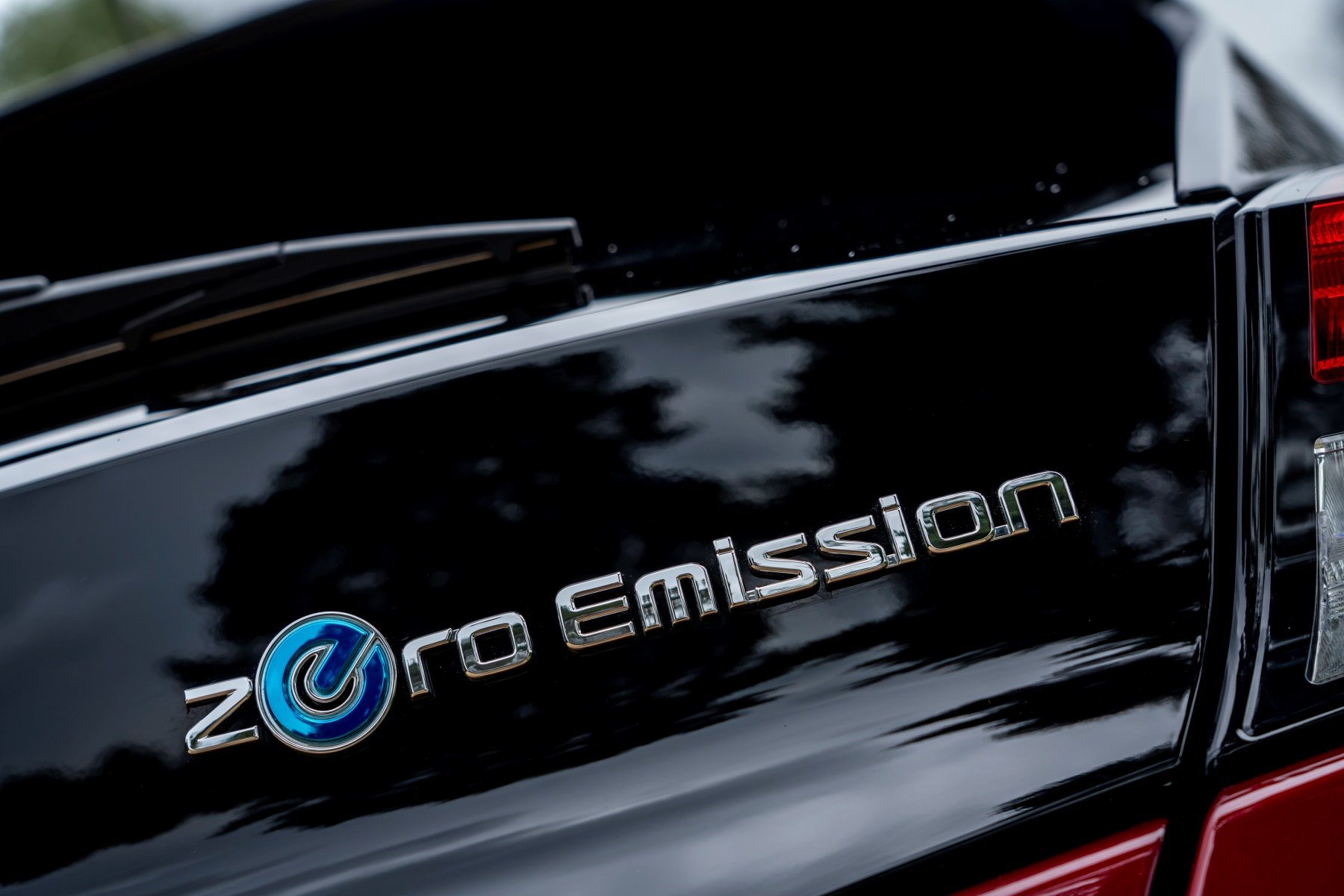 Finally, Nissan’s ProPILOT is fitted as standard. It’s a semi-autonomous driving aid that uses the adaptive cruise control and lane departure system to allow for limited periods of hand-free motoring on motorways and fast A-roads, reducing “driving stress and fatigue, enhancing driver confidence behind the wheel”.

Needless to say, it was awarded a maximum five stars in Europe NCAP crash testing.

Driving the Leaf e+ is very similar to the regular car. It’s a pleasant cabin environment with a straightforward dashboard design, an easy-to-use infotainment system and plenty of space up front. 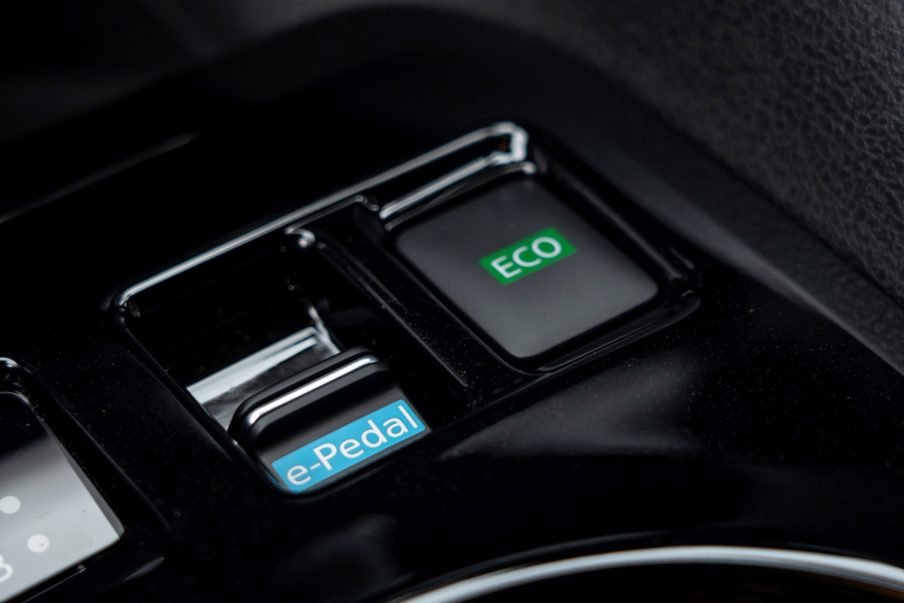 It would be wrong to call it luxurious, but it’s comfortable enough, even if the driving position is on the high side. Passengers in the rear get plenty of legroom but, because they are sitting above the battery pack, headroom is slightly compromised for taller adults, while anyone sitting in the middle will have to straddle what looks like a large transmission tunnel. Boot luggage capacity is slightly down from 435 to 405 litres.

Even though the Leaf still isn’t the coolest car on the market, there is scope for personalisation, because there are 10 body colours and seven two-tone body and roof colour combinations.

Driving an electric car is still a novelty. Rapid and silent take-off is the order of the day. It’s so easy too, especially if you use the excellent e-Pedal system, which allows you to slow to a stop without touching the brakes. 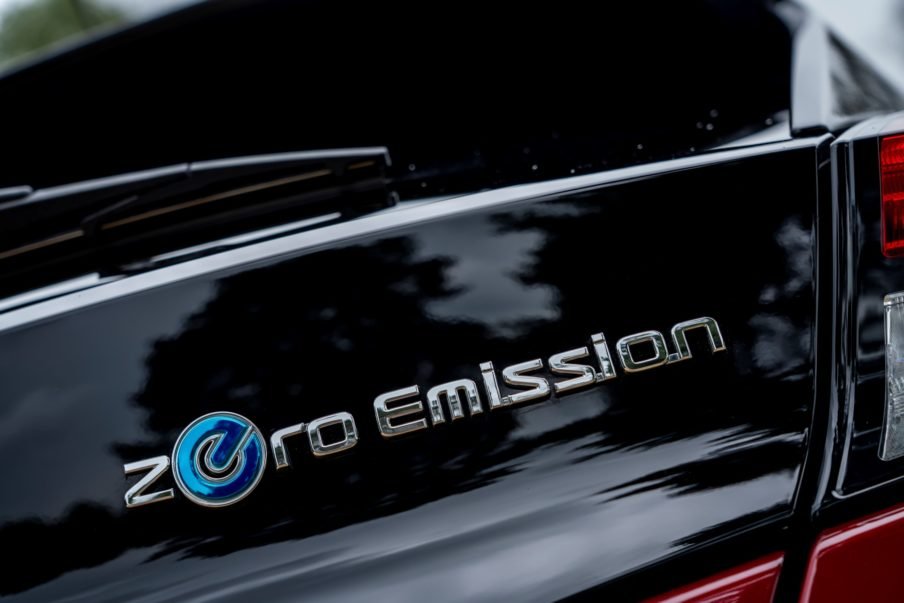 It doesn’t take long to adapt to driving completely with the use of the accelerator pedal alone. On the open road it actually encourages smoother driving approach – no bad thing – as you learn to anticipate the geography and traffic ahead – and recharge the battery via steady braking and cruising to a halt.

The overall driving experience hasn’t changed dramatically. Thanks to light steering and good visibility, navigating through town is a doddle in this nippy EV.

On faster roads and motorways it’s pretty much the same story, where it’s refined and smooth. The ride is not dynamic and can get fidgety. If anything, it’s on the firm side, but perfectly acceptable. There’s a little road noise, but that’s only because the electric motor is whisper quiet.

Drive the new Leaf in a more spirited fashion and you’re aware of the extra weight, especially through faster corners, but expecting it to handle like a hot hatch misses the point of the Leaf. Eco-driving is all about smooth driving and regenerating the battery pack, so just take it easy and enjoy cheap, zero emissions motoring.

That said, grip is surprisingly good for such a relatively tall, heavy hatchback, while body roll is kept in check.

For peace of mind, the Leaf has a three-year/60,000-mile warranty, stretching to eight years/100,000 miles for the battery, which Nissan claims has “zero” issues anyway.

Verdict: The new Nissan Leaf e+ builds on the significant improvements introduced with the second generation model in 2018. With a real world range of 200+ miles, it’s now able to compete with the best of the newcomers in its class. Range anxiety may not have been completely consigned to history, but it will now definitely have a much broader appeal. Safe, comfortable and easy to drive, the Leaf is now back in the game. 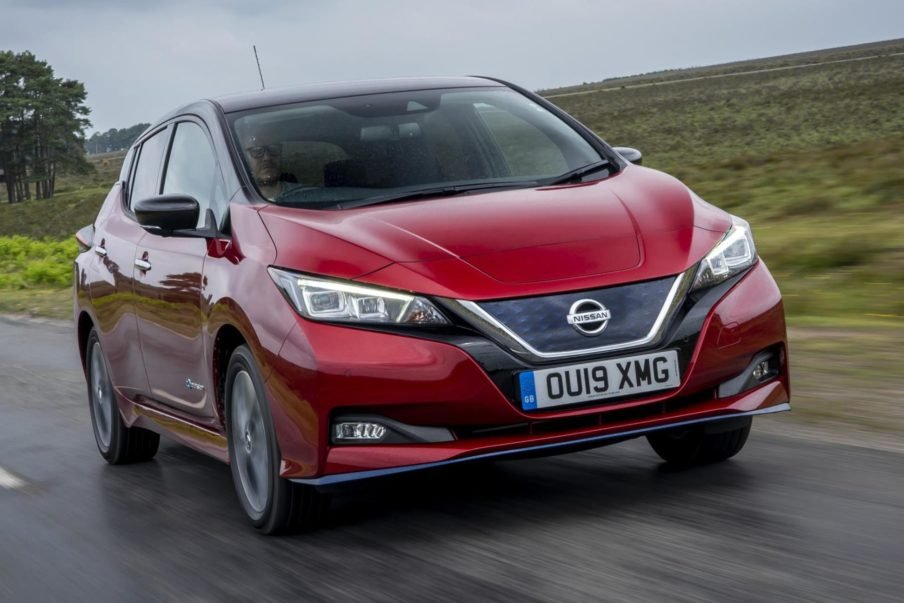