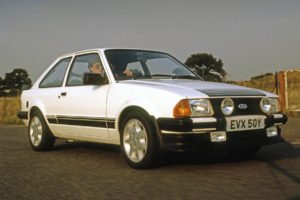 Ford briefly dropped the RS badge when the Mk2 Escort gave way to the front-wheel drive Mk3. The first hot version of this car was the 1.6-litre XR3, quickly replaced by the fuel-injected XR3i.

The XR3i was the basis of the short-lived RS1600i, which had more power (115bhp rather than 103), higher gearing, revised suspension, a front spoiler, a rear wing and bonnet stripes.

The RS1600i was quite successful in motorsport, but not to anything like the same extent as the screaming RS1800.